While digital note taking is gradually catching up with next gen, earlier generation still prefers the pen and paper approach. Note taking many a times in our day to day routine, is very ad-hoc and unstructured. This leads to notes getting scattered across various books or pages which have high chances of getting misplaced. Plus gradual accumulation of lot and lot of old books. With many individuals doing note taking in similar manner we end up cutting more and more trees and damaging the nature with every passing moment.

With all this in place how do we go about note taking? Here is what I usually do:

This way I'm able to reuse a single book for several months there by reducing stack of notebook which would pile up otherwise. Plus scanning the articles helps me maintain the notes for long term basis without worry about loss and wear and tear of pages.

If more and more people follow similar approach or something on these lines we can certainly reduce the amount of trees that need to be cut there by protecting nature.

Posted by Anirudh Prabhu at 10:56 AM No comments:

"Finding difference between two dates" is not a new topic in JavaScript world, however with this post, i wish to go one step ahead by providing this ability as an extension of Date object itself and in a configurable manner.
In this code we extend Date object prototype with a new method named "difference". This method take another date (Created using "new Date()") and "unit" for comparison result i.e in what units do you want to know the difference e.g "seconds","minutes","hours","days" or "months"

Posted by Anirudh Prabhu at 6:02 AM No comments:

How to fix: Smart watch 2 won't install apps on MIUI 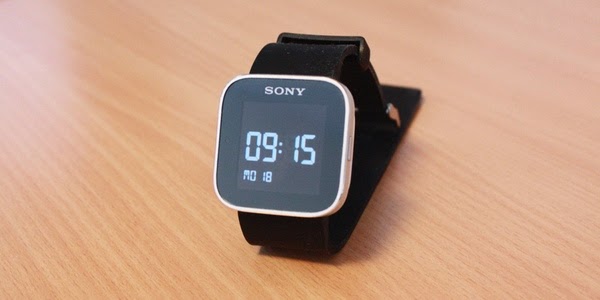 Many people trying to connect Sony smartwatch to phones with MIUI or Xiaomi Phones have faced issue where even after downloading and installing apps for smartphone from Google play store, the apps are not seen on the watch for use.

In this post i will provide simple steps for solving this issue. Please note that this fix requires rooting your phone.

Step 3: Install all the smartphone apps you need from Google Play Store.

Step 4: Select the specific app from lucky patcher's list. Click on tools and select "Move the app to "system/app""

After phone reboot you should see the installed app on phone. :)
Posted by Anirudh Prabhu at 2:01 AM No comments:

This is a short post describing a solution for a very common problem on android phones. One of the common problem with android is that, Apps cannot be downloaded over 3G connection. This problem is not only there with the play store, but with other applications dealing with media. The solution for this is very simple!
Go into Settings/...More settings/Mobile networks/Access Point Names. Choose your Access Point name and empty Proxy and Port. And that should fix your problem!
Posted by Anirudh Prabhu at 8:01 AM No comments:

A Caesar cipher, also known as Caesar's cipher, the shift cipher, Caesar's code or Caesar shift, is one of the simplest and widely known encryption techniques. In this type of substitution cipher each letter in the plaintext is replaced by a letter some fixed number of positions down the alphabet. For example, with a left shift of 3, D would be replaced by A, E would become B, and so on. The method is named after Julius Caesar, who used it in his private correspondence.

As with all single alphabet substitution ciphers, the Caesar cipher is easily broken and in modern practice offers essentially no communication security.

The transformation can be represented by aligning two alphabets; the cipher alphabet is the plain alphabet rotated left or right by some number of positions. For instance, here is a Caesar cipher using a left rotation of three places, equivalent to a right shift of 23 (the shift parameter is used as the key):
Plain:    ABCDEFGHIJKLMNOPQRSTUVWXYZ
Cipher:   XYZABCDEFGHIJKLMNOPQRSTUVW

When encrypting, a person looks up each letter of the message in the "plain" line and writes down the corresponding letter in the "cipher" line. Deciphering is done in reverse, with a right shift of 3.

The Caesar cipher can be easily broken even in a cipher text-only scenario. Two situations can be considered:

In the first case, the cipher can be broken using the same techniques as for a general simple substitution cipher, such as frequency analysis or pattern words. While solving, it is likely that an attacker will quickly notice the regularity in the solution and deduce that a Caesar cipher is the specific algorithm employed.

In the second instance, breaking the scheme is even more straightforward. Since there are only a limited number of possible shifts (26 in English), they can each be tested in turn in a brute force attack. One way to do this is to write out a snippet of the cipher text in a table of all possible shifts — a technique sometimes known as "completing the plain component".


The example given is for the cipher text "EXXEGOEXSRGI"; the plaintext is instantly recognizable by eye at a shift of four. Another way of viewing this method is that, under each letter of the cipher text, the entire alphabet is written out in reverse starting at that letter. This attack can be accelerated using a set of strips prepared with the alphabet written down them in reverse order. The strips are then aligned to form the cipher text along one row, and the plaintext should appear in one of the other rows.
Another brute force approach is to match up the frequency distribution of the letters. By graphing the frequencies of letters in the cipher text, and by knowing the expected distribution of those letters in the original language of the plaintext, a human can easily spot the value of the shift by looking at the displacement of particular features of the graph. This is known as frequency analysis.

We can enhance the strength of the cipher by overcoming these 2 issues. Let us look into these 2 issues and how we can overcome them:

As you read earlier in Caesar cipher each letter in the plaintext is replaced by a letter some fixed number of positions down the alphabet. Thus if attacker manages to figure out shift index he can easily break the cipher text. We can overcome this making the shift index variable. Consider the example shown in the table above. Instead of using a fixed index of 4, the index could be length of the string I.e 12. Using such variable index will make the cipher text difficult to predict. In addition to this advantage, two similar word/phrase with different lengths would have different cipher texts. For example attackatonce and attackonce will have no pattern in common even though the word “attack” and “once” are being repeated. This happens because the string length is different thus the shift index will be different.

Knowledge about character at a given index 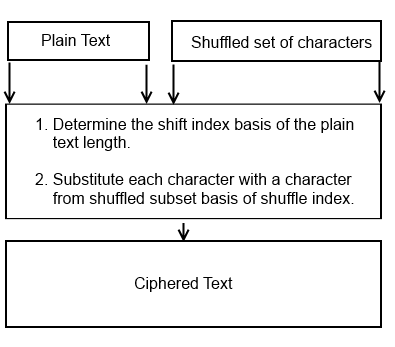 Enhanced Caesar cipher can be implemented in following manner:

For example
The plain text to be ciphered is “america”. The shuffled subset is “adwxyzefijklmnoghpqrstbcuv”. The cipher for this will be “frnagyf”. In this example “a” is substituted with “e”. For this substitution we 1st determine the position of “a” in shuffled subset. This is 1. Now we need to determine the shift index, which is length of string i.e. 7. Thus with a right shift of 7,”a” gives “f” as per the shuffled set. Similar substitution process will be applied to each character in the given word.

An enhanced cipher technique derived from a simple substitution cipher is much effective compared to its original version.
Posted by Anirudh Prabhu at 12:03 AM No comments:

Debugging web applications on android device as been a challenging issue. This becomes further challenging when the debugging is to be done on native browser of Android.
The debugging tools provided by native android browser are insufficient to perform detailed analysis of the problem. (In case you're not aware about these tools and wish to check em out type "about:debug" in your native browser's address bar and then check your settings menu for debug options).
While looking for solution of one of my problems on native android browser i came across this tool which does the job brilliantly! Its name is jsHybugger (https://www.jshybugger.com/#!/).


When you use jsHybugger App, jsHybugger runs on your device and provides two things:
Using this very simple and straight forward. Steps for it are as follow: 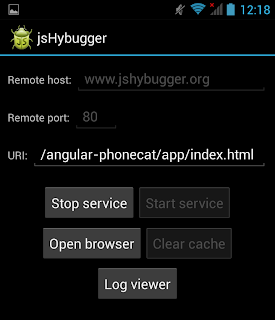 Happy Debugging!!!
Posted by Anirudh Prabhu at 10:39 AM No comments:

Hey folks today we will look into some basics of jasmine. Jasmine is a behavior-driven testing framework for JavaScript programming language. It’s a bunch of tools that you can use to test JavaScript code. you can test your code against specifications that you write. If your code should work in a certain way, Jasmine helps you express
that intention in code.

Getting Started
1. Start by downloading the latest standalone release of Jasmine (https://github.com/pivotal/jasmine/downloads). Unzip it.

2. In your html include scripts in following order:

3. Now include you spec file. This is a normal js file in which your test cases are written. So in our case it will be

Please not that always include spec file before actual code file.

4. Now we include the code file

Which will contain our logic

* A describe("some name"...) is called a suite. This name of suite would usually be a component of your application.
* Inside of suite is the it() block. This is called specification. Its is a Js function that says what a small  peice of your component must do.

* Matchers: This basically takes the arguement to the expect function and checks to see if it satisfies some criterion in the matcher. for example: toEqual()

Now lets take a look at the spec

You can view the example here: http://designmantra.x10.mx/jasmine/

Here is the code for spec file:

Here is the corresponding code for calculator.js code

Hope this article was useful. For any queries write me at prabhu.anirudh@live.in.
Posted by Anirudh Prabhu at 8:05 AM No comments: